Rather surreally, we've just hosted the reading of a screenplay in our flat in Highgate! 20 actors crammed themselves into our front room, ate several tonnes of cake, and read through Mentalo by Terry Newman and my good mate, Marinella.

The screenplay was wonderful; incredibly atmospheric and highly original, although the occasion itself was all a bit Christopher-Guest-meets-Mike-Leigh. Actors can be very odd!

There's now a rather pretentious dissection of the piece taking place over cups of tea, glasses of port... And more cake! I think we could all be here until very late! 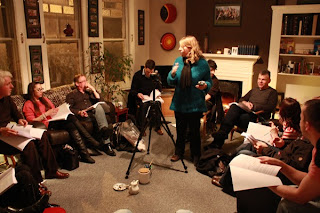 Marinella instructs the readers...
March 7th 1661, and Pepys went to Woolwich, once again, to watch some old Navy stock being sold off to the highest bidders. There was much drinking in the City, where Pepys went in search of a beautiful barmaid he'd been tipped off about by his mate Llewellyn.
Posted by Benjamin Till at 22:47