I'm heading back from Soho, where I had a meeting with a lovely lady from the BBC Olympic Committee. I had a gin and tonic. She had a wine. It's the first alcohol I've had this year, so I felt rather naughty. It went straight to my head, obviously... no doubt assisted by my cold, which has now turned into a hacking cough. Anyway, I liked the lady I was meeting very much. She seemed to understand me on a creative level, which is always nice. Sometimes I view the BBC as a sort of number-crunching, faceless robot. I'm often not at the meetings where important decisions are taken, so it feels rather nice to meet one of these decision makers, and know that she gets where I'm coming from.

Very often, within institutions, displays of emotion can be greeted with suspicion and intolerance. This can start to get a bit tricky when you do the sort of thing that I do. Perhaps I'm just making excuses for my periodic, hot-headed, hirarchy-shunning theatrical displays, but I suspect my all-too easily accessible emotions add at least a certain something to the films that I make.
What am I trying to say, I wonder? I've no idea. I'm drunk and knackered. I suppose, in simple terms, I don't know how to think like an exec, or a journalist, or someone whose been on lots of courses in people management, so it's always a relief when someone winks at me and says "that's okay..."

I dropped my beloved iPod in the bath this morning - don't ask- and it's completely dead. Sadly, I can't actually afford to replace it at the moment, so until there's some good news, financially speaking, I'm gonna be running to the music in my head, which is incredibly dangerous. Doing all these fabulous films may be extraordinarily rewarding, but it will never make me rich. Radiantly happy, but poor as a church mouse. And too old to be poor!

I was watching the news earlier on and one story hit me like an iron bar. It's this business with L/Cpl Liam Tasker, killed in action with his sniffer dog, Theo. Initial reports suggested that they were both shot on the battle field, but it's transpired that the dog simply curled up and died the following day. I am normally extremely hard-line when it comes to soldiers dying in action. Part of me believes that if you live by the sword, you kind of need to be prepared to die by it. But the idea of man and dog having such a close bond is utterly moving to me. Like those old people who can't live without one another, and literally die of a broken heart. 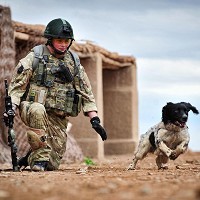 Here they are... I'm sad again
﻿
I had a very similar response to an episode of Futurama, the end of which you can see here.
March 3rd 1661 was a Sunday, and Pepys went to church before lunching with Sandwich, who was planning to go to the country the following day. Pepys also reported that an Franco-Italian politician, Mazarin, had died. I can't begin to get too excited by the idea of finding out about the man. Pepys seemed to think it was an important death. Mazarin liked diamonds and succeeded Cardinal Richelieu. French politics..? Whatever, really.
Posted by Benjamin Till at 23:22